It is almost inevitable that housing correction is coming. Most of the upswing nationally in housing prices is caused by low borrowing rates. A mortgage payment is mostly made up of three different columns 1) Principle 2) Interest 3) Other required costs of homeownership like insurance and taxes. The bulk of the payment comes from the first two.

Banks start the process by determining your “ability-to-repay” the debt. This comes to a given amount that they assume borrowers can repay, let’s say this number is $100 a month. This means you are approved if Principle, Interest, and Other Costs can come to less than $100 a month. So all of the “costs” combined need to stay below that mark, a zero-sum figure.

Now as interest rates were low, the amount of 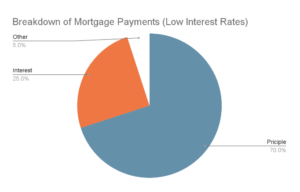 the interest portion of the loan was low. Meaning more money could be freed up for the principal portion. And that principal portion is the rate at which the loan is being repaid. So if over a 360 payment loan $75 on average is getting paid in principle, the loan can retire $25,200 in debt. So the borrower can offer $25,200 for a home with faith from the bank that they will be able to repay. Thus, the buyer in the real estate auction can spend $25,200 max (and they will spend all of it).

Now if that same borrower, who can afford $100 a month in mortgage payments 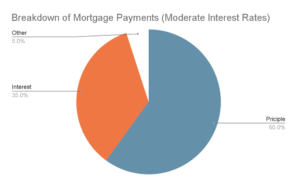 has to borrow in an interest rate environment that is 10% more costly than before, a rate change of borrowing from 2% to 2.2% the borrower will need to borrow from the principal repayment part of the pie. That means that the average payment they can afford to make comes down, and they will only be able to offer $21,600 when making an offer on the house. This is 14% less, after a 10% move up in borrowing costs.

This is where it will get interesting.  The “rates” 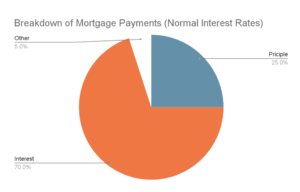 that you may have heard are rising, are the percentages at which banks borrow. That money has cost banks 0.25%, since 2020. It’s made spending during the pandemic easier and lowered the cost of capital risk for banks in order to keep the money flowing. So, a bank borrowing at .25% or close to it can lend a 30-year mortgage at really low rates. Hence the sub 3% and 2% mortgage rates we saw in the last 2 years and on the heels of the 2009-2016 recovery cycle.

The by-product of this low-interest rate, high spending environment is inflation (the rising costs of goods and services). So if the cost to the bank to repay these loans increases, the cost for borrowers increases at a faster rate. So the rate of change is more than the 10% increase we discussed above. A borrower seeing their interest rate go from 2.2% to 4.4% (while still historically low) will see their capacity for repayment severely impacted. By just returning to normal lending rates the portion a borrower can repay is reduced. The borrower who could afford a $100 a month payment, now sees his buying power reduced to $9,000 over the course of the 360 mortgage payments in a 30-year mortgage. The borrower now has 41% of the buying capacity by doubling the borrowing rate, this change in the amount of borrowed capital buyers brought into the house buying equation, means that the bid sizes will invariably contract. Bringing the prices that a home clears the market down.

In the above scenario, the ignored part of the pie is the “Other.” This is mostly tax and insurance, but also includes power, water, HOA’s, and other required expenses for the ownership of a home. These costs are also climbing, and they too will erode the buying power of borrowers. This has been a largely understood space for some time, but as inflation continues to outpace wages, this will have a growing negative effect on the buyer’s ability to borrow. This is simply shifting payments from principle into insurance.

What is missing from the “crash” in ‘08?: Leverage

So just understanding that buyers are going to lose buying capacity in a given market doesn’t result in a crash, it just means that home prices will contract. What is still missing in this equation is selling pressures.

The housing crisis wasn’t just the rising cost of home prices, it was also the deterioration of credit quality borrowers, and excess leverage. As the housing market of the early 2000s looks eerily similar in growth, an important distinction is made between the two when we look at the leverage ratio of borrowers. This is a result of the bad actors in the housing crisis leveraging one house with another, and another, and another. This allowed the rampant contagion of home selling. One default in the leverage on leverage structure meant that a single default meant 2 or more defaults as a result.

The low credit quality and poor borrowing strategies (adjustable rate mortgages, and subprime lending) meant that all borrowing became interconnected. Now while the current system has become somewhat lax on the underwriting standards again, the use of adjustable mortgages and equity requirements for vacation and second homes remains largely intact. Limiting the contagion of contraction to single borrowers.

What is missing from the “crash” in ‘08?: Employment

Employment is well below 4% and that is encouraging. That means that there is plenty of demand for workers and that if a borrower is qualified when they are employed, the risk of losing that employment is at its lowest point ever. Broadly speaking this means that it’s worth keeping an eye on, but will limit the amount of forced selling that could trigger a true “crash”.

A IRA without investment limitations Annual Contribution Max: $6,000 or $7,000 if over 50 years old. Why we like Self Directed IRA’s: Available to anyone 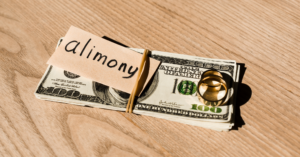 Divorce Playbook: Adequately insure any payments in the divorce settlement

Often overlooked during the divorce, and somewhat difficult to remedy after the divorce is using insurance to back up any financial agreements you come to.

How can you get to the point where you’re ready to own your own dentist practice and begin starting your dental career. You’re a freshly