We have an agreement, which means we can begin to criticize it and plan for the investment and economic effects. The bill is a litany of half measures, no long term solutions, and likely sets up a couple of battles in the next congress.

Congress punted on evictions, postponing medical payments until early next year, and there is still an ongoing debate regarding the amount it is issuing in direct payments. The looming liability concern for businesses is still being discussed.

Here is what got done:

Individual payments for many

Easily the most asked about part of the legislation is the direct payment to individuals that begin going out today. The passed version included $600 going to individual adults with an adjusted gross income of up to $75,000 a year based on 2019 earnings.

An increased amount will be going to those that file as heads of households who earn up to $112,500 and couples (or someone whose spouse died in 2020) who make up to $150,000 a year would get twice that amount.

This continuing political battle to raise this number from $600 to $2000 is still going on today, passing with all democrat and some republican support in the house. The senate is questionable as a few Republicans have endorsed the idea, including the two high profile candidates in Georgia – Loeffler, and Purdue.

McConnell has blocked the bill as of 10:20 am as I am writing this article.

With almost 7% of Americans still unemployed and millions more under-employed, Congress acted to extend multiple programs to help those out of work, albeit at less generous levels than in the spring. Too much of the surprise of those tracking the issue, the final bill doesn’t include the expanded coffers many anticipated and is considered a skinny agreement.

The agreement would include:

Better late than never, the expanded agreement is a second band-aid for those Americans that continue to seek employment as employers have halted hiring. The near term negative effect of unemployment cannot be understated. But as we look out to the intermediate (6 months) range seems to hold a fantastic capacity for consumers to unwind pent up spending in short order. The unemployment insurance isn’t expected to be much but will support many Americans who put more and more spending on credit cards in the second half of the year.

School budgets have been uniquely impacted by the pandemic and have left their outlook for the year to some impaired:

K-12 schools saw more support than the initial package in dollar terms, and even more than the proposed package in November; however, the funds still fall short of what both sectors say they need to blunt the effect of the pandemic and to support operations in 2021.

The majority of school districts transitioned to remote learning and as a result, we were asked to make expensive adjustments to accommodate while seeing enrollment drops upend budgets. Colleges and universities are also facing financial constraints amid rising expenses and falling revenue.

Child care centers that are struggling with reduced enrollment or closures will get help to stay open and continue paying their staff. The funds are also supposed to help families struggling with tuition payments for early childhood education.

The stress on national broadband has been higher than ever, remote work and education on top of the expanded requirements of technologies like Zoom, have put a major strain on national networks. The legislation includes $7 billion for expanding access to high-speed internet connections. Much of this spending was anticipated in an infrastructure bill, that has been brought forward as a result of the pandemic. Two major points in this part:

The bill puts forward $285 billion for additional loans to small businesses under the Paycheck Protection Program. This renews the program created under the initial stimulus legislation and is largely an extension of dollars that were repurposed.

Funding for vaccines and eldercare facilities

A ban on surprise medical bills

The Bill supports efforts to help Americans avoid unexpected medical bills that can result from visits to hospitals. The legislation also makes it illegal for hospitals to charge patients for services like emergency treatment by out-of-network doctors or transport in air ambulances, which patients often have no say about. This measure has had some long time support from Democrats and was criticized for not including some provision in the Affordable Care Act.

One more month of halting evictions is pushed out to the end of January. The Department of Housing and Urban Development separately issued a similar moratorium on Monday that protects homeowners against foreclosures on mortgages backed by the Federal Home Administration. It runs until Feb. 28. This has had several enforcement issues and while the legislation is a fantastic lipservice, the issues of evictions for individuals with a history of rental disqualification from before the pandemic are a continued source of evictions.

The bill DOES NOT include liability protection for business

A criticism by many that Democrats largely held out a provision for liability protection for companies trying to reopen. This element, opposed by labor unions and supported by the national Chamber of Commerce was a sticking point that went without inclusion. The discussion was important because it would allow businesses to follow their local recommendations to reopen to have legal insolation from lawsuits later on. This will continue to be a discussion in congress as a “reopen” is structured and the liabilities for business owners regarding COVID exposures are defined.

This gets us through the winter and hopefully the hump of COVID as the vaccine gets rolled out. It still leaves too much for the 2021 congress to cover and cover quickly. What the continued political, monetary, and fiscal landscape reactions look like is still up for debate. The curvature of risk in equities peaks in February (as I write this) so markets are pricing in a 2 month include equities and a political battle come early spring. 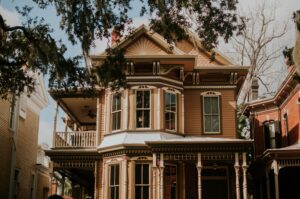 Real Estate Investing and More in your Retirement Accounts

Yes, you read that correctly, you can own real estate, land, private businesses, notes, precious metals, livestock, crypto currencies, equipment and more in your retirement

Tax Mitigation Playbook: Does it make sense to do a 1031 exchange?

Managing the 1031 Exchange Rules for Vacation Homes, Conversions and Mixed Use Properties